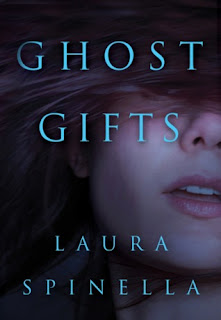 All Aubrey Ellis wants is a normal life, one that doesn’t include desperate pleas from the dead. Her remarkable gift may help others rest in peace, but it also made for an unsettling childhood and destroyed her marriage. Finally content as the real estate writer for a local newspaper, Aubrey keeps her extraordinary ability hidden—until she is unexpectedly assigned the story of a decades-old murder.

Rocked by the discovery of a young woman’s skeletal remains, the New England town of Surrey wants answers. Hard-nosed investigative reporter Levi St John is determined to get them. Aubrey has no choice but to get involved, even at the terrifying risk of stirring spirits connected to a dead woman’s demise and piquing her new reporting partner’s suspicions.

As Aubrey and Levi delve further into the mystery, secrets are revealed and passion ignites. It seems that Aubrey’s ghost gifts are poised to deliver everything but a normal life.

Review: Ghost Gifts by Laura Spinella is a romantic suspense thriller that will fascinate and entertain lovers of suspense, thriller and romance. No ordinary romance, and no ordinary suspense or thriller either, author Laura cast her magical spell as the reader is taken on an exciting superbly paced novel that is un-put-down-able. Entrancing, intense and riveting, Ghost Gifts by Laura Spinella is a gratifyingly satiating read that will leave many readers clamoring for more.

Masterfully crafted and skilfully-woven, with plot twists that will keep readers on the edge, this romantic suspense which furiously combines with the supernatural and the mysterious, took shape twenty years ago in Holyoke, Massachusetts when Aubrey Ellis was a thirteen-year-old girl. The story continues twenty years later in present-day Surrey, Massachusetts, with Aubrey working as the writer and editor of Surrey City Press home portrait feature. The uneventful and monotonous daily grind was broken one Friday when ghoulish skeletal remains had spilled out from behind Dustin Byrd’s basement wall. It was the skeletal remains of Missy Flannigan who vanished without a trace, and for which army veteran Frank Delacort was ultimately convicted of the crime sans body though he pleaded innocence.

With the case hogging media limelight, Surrey City Press entrusted the task of unravelling the whole mystery to Levi St John, a tough reporter with imposing skills but disturbingly dense in the area of personal communication. Aubrey Ellis, whose worked was confined to real estate, and with no experience of serious investigative journalism, was assigned to work alongside Levi, who was as much reluctant to work with her as she was with him. As the case considered solved with a conviction turned red hot almost twenty years later, Aubrey unknowingly was assigned her worst nightmare – a fast-pass, all-inclusive ticket to a murdered girl’s past – and her own ghost. Author Laura Spinella spins a thrilling yarn that will take you effortlessly through to the end. 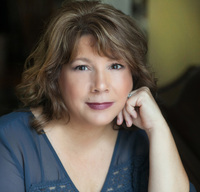 About the Author:
Laura Spinella is an East Coast author, originally from Long Island, New York. She pursued her undergraduate degree in journalism at the University of Georgia. The southern locale provided the
inspiration for her first novel, ​ Beautiful Disaster​ , which garnered multiple awards, including a Romance Writers of America RITA nomination. She’s also lived on Maryland’s Eastern Shore and in North Carolina before relocating to Massachusetts. She and her family currently live in the Boston area, where she is always writing her next book. ​ Ghost Gifts​  is Laura’s third work of romantic fiction. She also writes sensual romance under the pen name L. J. Wilson. Visit her website
Posted by theGreatReads at 12:39 AM

We are open to receiving ARCs & review copies.

When communicating with us, please include the synopsis/summary, release date (if ARC) and cover of the book.

Acceptance does not guarantee immediate review of the book. Sometimes, it can take up to two weeks, unless a specific request for an early date is made.

If you're interested in BOOK SPOTLIGHT or BOOK OF THE DAY publicity blitz, please contact us for more information.